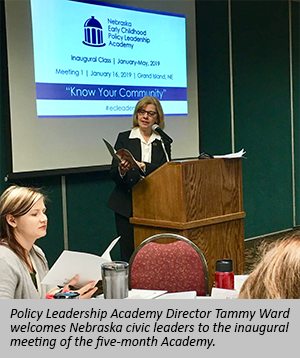 “Communities across Nebraska are rapidly realizing the need for local, high quality early childhood services,” said Tammy Ward, Director of the Academy. “Affordable, accessible early care and learning is central to our state’s economic development and a community’s local infrastructure. The Academy will help civic leaders better inform the decision-making process in their communities and state.”

During the five-month program, participants will assess community early childhood resources and needs, learn about the policy-making process, and build skills to shape the public conversation about early childhood’s impact on community vitality and growth.

“No one is better positioned to communicate about these issues than the Nebraskans who live, work and raise their families in these communities,” said Ward. “Our goal is to empower them to bring their own unique stories and needs to public- and private-sector stakeholders.”

Six of the represented communities – Gothenburg, Grand Island, Norfolk, Red Cloud, Schuyler and Wood River – have also been selected to participate in the City Leadership for Building an Early Learning Nation initiative, led by Nebraska Children and Families Foundation’s Communities for Kids and the National League of Cities.