Thank you, Barry Kennedy, for Your Support of Early Childhood 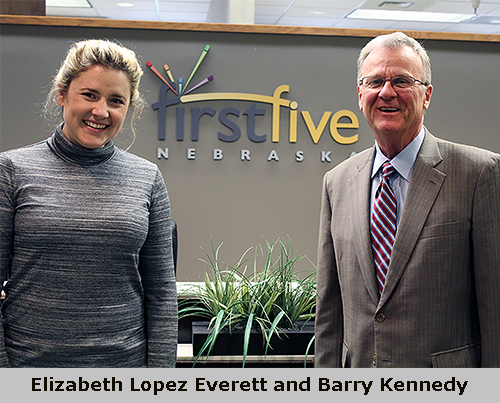 I recently had the pleasure of sitting down with Barry Kennedy, outgoing President of the Nebraska Chamber of Commerce & Industry, to discuss his incredible career and support of early childhood.

To say Barry Kennedy is an advocate of early childhood is an understatement. He has been a long-time champion of Nebraska’s youngest children and has spoken frequently on the importance of access to quality early childhood programs. As a father and grandfather, he understands that a large portion of brain development happens during the first few years of a child’s life. Providing quality learning environments for our youngest Nebraskans prepares them to enter kindergarten ready to learn and thrive.

He also sees the connection between early childhood and workforce development. One of the biggest problems he found when surveying Chamber members, he said, was their ability to attract and retain qualified workers. The brain drain in Nebraska affects nearly every community in the state, and cities like Broken Bow and Columbus have hundreds of vacant jobs they’re unable to fill. “We have one of the lowest unemployment [rates] in the country, so we need people and an educated workforce,” he said. To complement the work being done by the Nebraska Department of Economic Development, Barry says “early childhood must be part of the conversation because building an early childhood infrastructure in these communities can help attract and retain young working families.”

Barry was born and raised in Nebraska. A Pawnee City native, he served in the Army during the Vietnam War and spent the early part of his career as a livestock buyer. He was very active in the Junior Chamber of Commerce, and was the state president, national president and eventually the international president of that organization. In the mid-1980s, Barry became active in several political campaigns, including co-managing Kay Orr’s gubernatorial campaign. It was then that he met his predecessor, Jack Schwartz, who convinced him to join the Nebraska Chamber. He worked at the Chamber for 31 years, the past 19 years serving as president. “Working at the Chamber afforded me the opportunity to really focus on the issue areas that I was most interested in and cared about,” he said.

Nebraska has been fortunate to have Barry’s leadership, and his passion and support for early childhood will not be forgotten. On behalf of First Five Nebraska, thank you Barry for all you’ve done. Enjoy your well-deserved retirement!